Previously on Sweating With Strangers: I pad out an entire blog post worrying about whether or not it’s okay to like music that the creators have since disowned.

In my family, whenever Christmas or a birthday or any other big event rolls around, the default gift of choice for all family members is concert tickets. There’s usually a few hours of effort put into trying not to buy tickets, for fear of being predictable, but then we remember that it’s the only present we can be 100% confident in, and we hit up Ticketmaster for those sweet, sweet tickety goods.

This was exactly the case in 2002, when my parents’ 25th wedding anniversary loomed and I couldn’t think of what to buy them. Silver candlesticks? Not our style. Silver picture frame? Too boring. Bryan Adams is playing at Warwick Castle? Here you go Mum and Dad, have a lovely day out on me, you deserve it. Um, can I have a lift? 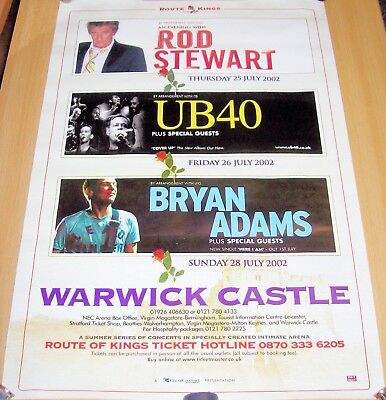 Bryan Adams, much like Bon Jovi a year earlier, had been earmarked early on as someone to see live at least once, so a summer show just up the road in Warwick was definitely not going to go to waste.

As with Bon Jovi, I’d had a surprisingly casual interest in the work of Mr Adams. Dad had his greatest hits album and Waking up the Neighbours, but even though I’d never heard anything of his I hadn’t enjoyed, I hadn’t gone the whole hog and bought all the old records, and I’ve still not listened to Reckless, the definitive Bryan Adams album as I understand it. 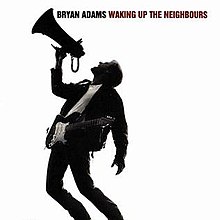 Unlike the build up to my Bon Jovi experience however, I was now in the grip of student life, and student life finances were starting to bite hard towards the end of my first year, so my funds no longer stretched to buying a veteran artist’s entire back catalogue to listen to. They didn’t really stretch to three concert tickets either, but what was I going to do – not go? Be serious.

Having listened to more Bryan Adams this week than I have in the rest of my life combined, I’m really not sure how I let him pass me by so easily. His heavier stuff has a really easy, natural rock and roll feel to it – and there’s none of the pomp or preening of hair-metal acts like Bon Jovi. And on top of that, the guy’s voice is just great for a rock and roller. Gravelly enough to roar or growl when he needs to, yet as smooth as honey – well ok, not honey, more like an ever-so-slightly coarse pate – when he wants to soundtrack more romantic moments. That’s a great combination.

I guess by the time he’d caught my attention he was already ‘movie ballads guy’, as my first experience of the man was him bogarding the top of charts for about a decade with ‘Everything I do (I do it for you)’. And then there was the thing from the Three Musketeers movie, and the one from ‘Don Juan de Marco’ that I could have definitely lived without.

Maybe these things tricked me into thinking the classic albums weren’t worth checking out and the singles collection was enough to go by. Either way, the upside of this was I never really thought of Adams as a hard-rocker, and so I didn’t really share the critics’ feelings that he was drifting away from that side of his sound around the turn of the millenium.By the time he teamed up with the most annoying Spice Girl for ‘When You’re Gone’, his cool factor was too far gone for those critics to notice that it was an absolute tune, and enough to convince me to buy my first ever Bryan Adams album, On a Day Like Today.  I really enjoyed that record, even if it had a whole bunch of lighter tracks and only a few belters such as ‘I Don’t Want to Live Forever’ and ‘Before the Night is Over’. The guy could clearly still cut it, and with my Bon Jovi success story in mind, I was confident that a Bryan Adams live show would be something worth checking out.

It turned out I didn’t actually need a lift with my folks, as I was single again and no longer pretending I didn’t need friends in my life. So I was joined by Lee – who likes anything remotely rock and roll-esque – and Haynes, who had Bryan Adams’ Unplugged album, and was mildly obsessed with ‘Back to You’. He kept asking if there would be an acoustic section, and we humoured him that there might be, even though clearly no-one wanted that.

Haynes was also most interested in what type of audience we would be a part of. He’d only ever been to young person’s gigs, and clearly hoped Lee and I could use our wrinkly old rockers experience to allay his fears that we were going to be surrounded by blue-rinse haired grandmas. I wasn’t much use I’m afraid, as it had crossed my mind that might be the case.

I was very wrong, because do you know who likes Bryan Adams – or at least, who liked Bryan Adams in 2002? All the hot girls in the midlands, that’s who! And, as it was a burning hot summer’s day, they were all dressed like they were going to the beach. As we stood outside the castle grounds in the snaking queue, Haynes and I discussed our astonishment at the wondrous sights surrounding us while Lee, still very much in the closet at this point, muttered something unconvincing in agreement. This was utterly unexpected, and we found ourselves wishing we had dressed better for the occasion.

It was also in this queue that I absolutely, definitely and indisputably invented the following joke:

“What time will Bryan Adams be on?”
“Well it says on the ticket that the Doors are on at 7, so I guess around 8 o clock?”

I’ve since learned that lots of people around the world know this joke, and it gives me great pleasure to have started such a worldwide movement.

Unlike my last gig at Warwick Castle, there were no seats to worry about, so once we were inside we assumed a position a short way back, seated on the grass, burning in the sunshine. As we waited, Haynes and I told Lee the story of our time in Swansea watching the Stereophonics, where we’d been sat in a similar position for hours until all of a sudden the whole crowd jumped up and pushed to the front…. and…. as…. we …. were telling it.. it started.. happening..exactlythesamewayOHMYGODQUICKGO! It was as if we had caused it by opening our mouths… actually it’s happening again right here as I type this too!!! Just kidding. But it did happen in Warwick. Oh how we laughed.

Soon enough it was support band time, and oh my word, they were fantastic! The band were called Vega 4, and – mainly due to the singer’s voice – put me in mind of a non-Manc, louder version of The Verve. All the songs had a really big sweeping sound, perfectly suited to the large outdoor show, and we laughed at how despite the plethora of radio-friendly ballads they played, their guitarist definitely looked like he wanted to be in a metal band, and was itching to break free at any moment.

At one point the singer climbed the rigging as he sung, which always terrifies me, but is a really smart way to get remembered as a support act. I mean, an even better way to get remembered would be to die or cripple yourself by falling off the rigging, but fortunately this didn’t happen on this occasion, and I made a mental note to check them out again as soon as possible.

Before too long, it was time for the main event. In between bands we’d been playing – perhaps for the first time ever – the now classic gig game of “What Will They Open With?”, and whatever it was going to be, I really couldn’t imagine it would be anything other than an epic opening. I was so naive.

Of course, artists don’t trek across the Atlantic for the good of their health. Everyone is selling something, and in Bryan Adams’ case in the summer of 2002, he had the soundtrack to that classic movie, Spirit: Stallion of the Cimmaron to flog, and this was nominally the ‘Here I Am’ tour, so he opened with that song.

What a let down. I know it’s common for artists to start with the first track off their new album or their current single, and I know ‘Here I Am’ is an appropriate title for an opening track, but come on! Literally no one was there to here that song. It’s such a forgettable track that I honestly don’t remember how it goes, and I’ve been listening to Bryan Adams songs for a week. Hang on, I’ll remind myself….

….. yep, it’s pap. Bland, background music pap. Perfect for playing over a beige cartoon about horses, bad for starting a rock and roll show with. Bad form Mr Adams. Bottom of the class for you.

With that most disappointing of openers behind us, the question was whether Bryan could possibly pull this back? Well of course he could! He launched into ‘Back to You’, and the relief was palpable as Warwick erupted into song and Haynes squealed with joy.

From there on, it was a main set of pure gold. Straight into ‘House Arrest’, my favourite song from Waking up the Neighbours, and then the party anthem trio of ’18 til I die’, ‘Can’t Stop This Thing We’ve Started’ and… hold the phone… ‘Summer of 69’!!!

Yes, that’s right, in 2002 Bryan Adams played ‘Summer of 69’ sixth in his set! I was filled with instant respect, but also a hint of trepidation. Surely he’d blown his wad too soon? How would he be able to bring the show to a climax with this monster gone so early?

The answer was – as it always is – to have a surprise diamond in your back pocket, a song that people might not realise is a huge crowd pleasing anthem, and which usually needs to be heavy on the crowd participation. In this case, it was ‘The Only Thing That Looks Good On Me Is You’, which Adams spun out into a giant sing-a-long, with the whole crowd joining in to sing back to him.

It was so good, I honestly would have remembered it as the end of the whole show if the internet hadn’t convinced me it only ended the main set! Hey, it’s been sixteen and a half years, you have to let me off a few memory missteps.

All in all, it was another great gig. Bryan Adams shook off a dodgy start to exceed my expectations, and I discovered another new upcoming band to support.

What became of Vega 4? More on them another time, but the singer at least has done rather well for himself. He now plays guitar for Snow Patrol, and writes massive hit songs for Ed Sheeran. Oh, and he’s married to Courtney Cox!

He’s come a long way from climbing the rigging in Warwick.

That’s it for this one. Would you be so kind as to Like the blog or leave a comment? Maybe share it on social media? I do like it ever so much when I know more than six people read along.

Oh, and come back next time, for a second dose of ska-punk!