Previously on Sweating with Strangers: Lifehouse get angry, but not too angry, there are records to sell after all.

Who knew there was an arena in Exeter? Not me, that’s for sure, until Stereophonics announced that their You Gotta Go There to Come Back tour would by swinging by Westpoint Arena while I was at uni 5 miles away. This gave me a great opportunity to achieve ‘Stereophonics Venue Bingo’ (stadium, theatre, arena), so oh happy days, gather up the gang, we’re going!

Poppa agreed to join (and drive) me, and – using it as an excuse to come and get pissed by the seaside in November – Haynes travelled down with him, even though he didn’t fancy the gig.

I think the You Gotta Go There… album had seen his interest wane somewhat, as it had for many Stereophonics fans, but I personally didn’t dislike it. There are some really good tracks on there like ‘Maybe Tomorrow’, ‘Madame Helga’ and ‘High as the Ceiling’, but it’s definitely their most confused and unfocussed album, swinging wildly between piano numbers, all out rockers and country-tinged ballads seemingly on a whim. Kelly Jones once explained it by suggesting the band were on a lot of drugs at the time. That certainly explains his haircut.

Strangely, in a possible attempt to replicate the success of ‘Handbags and Gladrags’ on ther previous album, the band started playing a new song, ‘Moviestar’, during this tour, and then reissued the album with it included. It’s easily my favourite song on the record, and a real pointer towards the massive improvement that came with their next album. So while I’m pretty sure that they intended the title of the album to mean that they had been to a bad place and were now back, it ended up seeming like this was the bad place you had to go to in order to get back to your best. 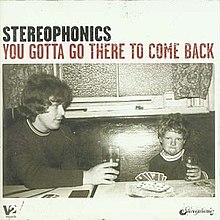 It definitely felt like things were at a low ebb. Not only did it appear that the love from the fans was fading, but post-‘Mr Writer’ the cat was out of the bag when it came to critical acclaim as well, and the band – and Jones in particular – seemed like figures of amusement in the media. The lowest point came shortly before the tour started when Stuart Cable left the band, to begin the Spinal Tap-esque musical chairs of Stereophonics drummers.

So all in all, expectations weren’t at their usual high for the show, but there was always the hope that one great rock ‘n’ roll show could change everything. So Poppa and I left Haynes playing pro-evo with my housemates and headed over to Exeter, on the promise of hideous amounts of booze and a giant night out on our return.

On arrival at Westpoint, it quickly became apparent why I hadn’t heard of the ‘arena’ or of anyone playing there. It was basically a giant hangar-like exhibition hall, with nothing around the sides and the stage just set up randomly at one end. Definitely more suited to farming exhibitions than rock concerts, and so the sound tended to echo around the structure during any quiter songs.

Tim Burgess from the Charlatans was the support. I’d never been a fan of the band, and I don’t remember anything about his show, so he can’t have done anything magical to change my opinion. There’s your Tim Burgess Live review.

When the ‘Phonics took the stage they eschewed the ballady openings they had gone for when I had seen them before and launched into ‘Madame Helga’ and ‘High as the Ceiling’ before slowing things down. The set was, naturally, heavily based around the new album, particularly the start and end, with most of their old classics somewhere in the middle, but it’d be tough to complain too much about the make-up of a 25 song setlist!

I do remember thinking it didn’t bode well for the new album or the future that hardly anyone seemed to know the new album tracks, despite it having been a number one hit. But while some of those songs were clearly just taking up valuable space on this tour and wouldn’t be back, ‘Maybe Tomorrow’ in particular showed that it had the potential to become a Stereophonics classic, as it gave Kelly Jones the chance to show off his impressive vocals. I feel like even the most average ‘Phonics song has the potential to be great when Jones flexes his vocal muscle on it live, and that’s certainly always the case whenever I’ve seen them play ‘Maybe Tomorrow’.

If I’d been asked after this show, I might have said that I suspected this would be the last Stereophonics tour that filled arenas, as the crowd definitely felt flatter than I – and presumably the band – would have liked. Of course, I would’ve been hideously mistaken, as what ‘Moviestar’ began shortly after this show, ‘Dakota’ would complete, buying the band a genuine rennaissance. But more on that in the future.

For now, we headed back to Exmouth to find that that Haynes hadn’t moved in 4 hours, and no one was up for going out.

That’s your lot for today. Thanks for reading, and for sharing, subscribing, liking, all that jazz.

Come back next time for the first really, truly, God-awful gig of my life.